By: Jibitesh Sahoo and Priyanka Jain 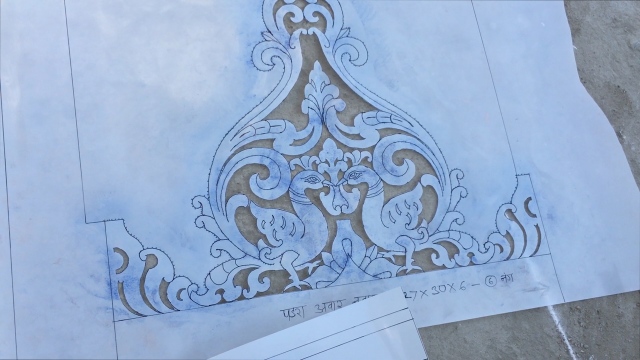 India’s temple-building industry is now proven as a major Silicosis hot-spot. The latest figures reported by the Sirohi Health department (in Jan 2019) reveal that over 1400 of its workers have been certified with Silicosis, a fatal, incurable disease (another 400 certified since we quoted 1000 certifications here). All of this in one block of Pindwara in Sirohi, Rajasthan, which is the biggest hub of stone carving work for temples. What is the value chain of this industry? What are the contractual relationships in it and does it have any interaction with caste and tribe segmentations?

The value chain of the industry kicks into action when a religious trust decides to build a temple. This trust could be huge and powerful or be a non-descript, town-level temple body. From the globally powerful Swaminarayan Trust, to the important Delwara Jain Trust to the smaller, town level religious bodies, they all flock to Pindwara’s stone-carving factories to fulfil their temple-building aspirations. The stone-carving factories in Pindwara, on the other hand, report receiving such assignment from temples being built from New Jersey to London to Jharkhand.

In Photo: Articles being made for temples at a stone-carving factory in Pindwara. Photo credit: Shubhadeep Ghosh

Once a trust decides to build a temple, the most common next step is for them to contact a Sompura. Largely based in Gujarat and Rajasthan, Sompura Brahmins are famous as temple-architects. Historically, Sompuras used to carve the stones themselves with hammer and chisel for temples. Then, it was considered to be a highly artisanal and skilled form of work.

Last 2-3 decades have witnessed two important shifts – a boom in temple-building in the country and the introduction of machines (cutters, grinders, drillers) in this sector. Factory owners report that there is growing demand to build more, bigger and grander temples with quicker turn-around times. Meanwhile, the introduction of machines has made the work dirty and hazardous, with heavy release of deadly silica particles from the mechanical carving of silica-rich, white, red and pink stones (that Jain and Hindu temples are commonly built from). With high risk to deadly Silicosis, the carving work has now transformed into cheap, dangerous and unskilled work, unfit for Brahmins. 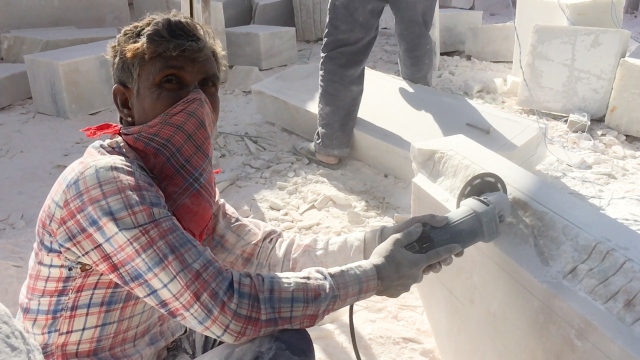 In Photo: Carving in progress with machines that release silica-rich, extra fine dust. The worker using the hand-held machine inhales large volumes of this dust, for 7-8 hours a day, given the lack of dust-control mechanisms in stone-caving factories.  (Photo credit: Yuvraj Dhir)

With these shifts, the Sompuras restructured their position in the industry into becoming powerful intermediaries. Now, they have become advisors of the temple-building process. They do not perform the carving work anymore but have maintained the role of designers of temples. For religious trusts, these designs are not just beautiful floral patterns or images of heavenly beings. For it to be temple-worthy, it must be pure and holy, and developed by Brahmincal gatekeepers of divine designs.

For lending their purity to this building process, Sompuras charge the Trusts a hefty 5-10% of the total temple-project budget. Ultimately, this fees is drawn from religious followers and donors of such temple trusts, including lay families and individuals who have no idea about the Silicosis epidemic caused by the industry’s carving process.

While shifting out of the carving work, Sompuras trained local labour in Pindwara to perform this work. Over a period of time, Pindwara emerged as the biggest hub for such stone-carving, especially with the setting up of Swaminarayan’s own stone carving factories here (that directly employ around 5000 workers today and many more through sub-contracting).

Sompuras have become the window through which temple-trusts access and manage stone carving factories. The common practice is for Sompuras to visit the factory once or twice a month to supervise the process. Some factory owners shared that they have full understanding and knowledge of how to design and carve the stones themselves and do not need the mediation of Sompuras, who charge them 5-10%  (in addition to the fees Sompuras get from the Trusts)! However, work independently managed by factory owners and carved by Adivasi and Dalit workers will not be considered holy enough for temples, without the touch and approval of Sompuras, who maintain their Brahminical hold on the whole process with utmost strictness. In case a stone carving factory manages to obtain a direct contract from a temple-trust, they would nevertheless need the approval of a Sompura before the trust would accept their consignment. For this, they must pay the Sompuras hefty fees.

The boom in temple-building industry has created employment for about 15,000 Adivasi and Dalit workers in Pindwara, but strictly keeping them in the lowest rung of hazardous and precarious work. Despite the multi-crore projects, there are no signs of effective dust control measures in the stone-carving factories where work is commissioned by them.

The relationships in this industry have a clear caste heirarchy – 3 out of every 10 of the Adivasi, Dalit stone-carving workers in Pindwara are dying due to Silicosis, while the Sompuras Brahmins have intensified their power and assumed a doubly profitable position, leveraging their age-old authority as Brahmins.

In Photo: The carvings become holy and be-fitting a temple only after a Sompura has given it the ‘final touches’ over the carvings produced by Adivasi and Dalit workers. Photo credit: Yuvraj Dhir

The temple-building industry’s caste lines are deeply etched and it does not entertain much flux. The Workers’ Right Centre and Pathar Gadhai Mazdoor Suraksha Union that has been dedicatedly working on this issue for last 3 years in Pindwara, report that despite Adivasis working in this industry for over 3 years, they are yet to find even one Adivasi that has been able to move up the value chain beyond a petty contractor. Even owning a small stone carving factory has remained firmly outside the ambit of this community.

The Union asserts that the temple-trusts and Sompuras have full knowledge of the deadly Silicosis epidemic caused by the work they commission. The Union leaders argue that they know of what is going on in their value chains, but continue to ignore it or blame the workers for the disease. Despite meetings with them at the District Collector’s office a few times, there has been no serious effort to invest and deploy technology that can be used in the small to medium sized factories where work is ultimately sub-contracted out to.

In the closed-room discussions of temple-trust and Sompuras, even stone-carving factory owners of Pindwara have very limited power. Work contracted to them is increasingly on adverse terms – moving to piece rate, smaller margins and higher competition. Ultimately, the cost of all of these is passed on to workers, some of them taking up the work on piece rate in the backyards of their homes. 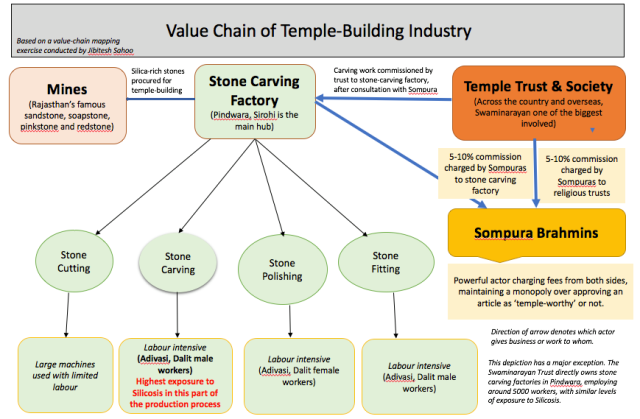 The industry structure is telling of its power dynamics. Factory owners, contractors and workers share that the math of the industry works as follows – for a temple of 1 crore, the religious trust would spend about 30% paying fees to various actors involved in producing the carved articles, pillars and statues of the temples. Of this 30%, 10-20% is usually the Sompura’s cut. The rest of the 20-10% is divided across a long chain of employers, sub-employers, petty contractors and the workers at the bottom. This is why the daily earnings of a stone-carving worker can vary at lot in Pindwara, from Rs. 200 to Rs. 500, depending on how many layers of sub-contracting they lay buried under. Despite the smallest cut, the heaviest toll is borne by the workers, due to extremely high exposure to deadly dust, with no social or job security either in return[i].

A dive into the temple-building’s industry value chain reveals that it is structured to reproduce the age-old Brahmanical authority of supposed custodians to God. It is underpinned by labour relations that are just as ancient in their degree of exploitation. Except this time, the extraction is concealed by fragmented value chains.

The insights shared in this blog are based on a value chain mapping exercise conducted by Jibitesh Sahoo, with the assistance of Pathar Gadhai Mazdoor Suraksha Sangh.

Watch this video and share to spread awareness on the issue on Silicosis in temple-building industry.

To support the Centre and Union’s initiative to prevent Silicosis in this industry, see here.

This entry was posted in Migration Musings. Bookmark the permalink.